Strange Marriage proposal in China , an example of Marketing Event 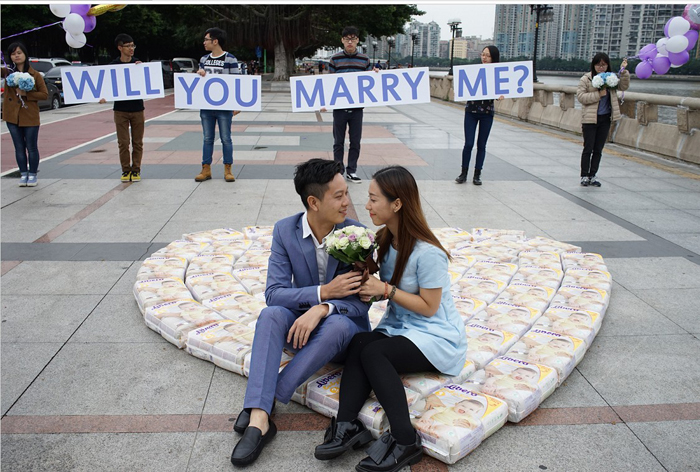 The story has been released on the top of Chinese social networks and especially on Weibo, a marriage proposal with packets of diapers…

The dream of all women is almost became reality … Every woman dreams that she would loves to be proposed from the one that she loves kneeling down with a ring and a huge bouquet of roses.

Here it is slightly different, everything was done in subtlety.

A young Chinese man named Feng asked his pregnant girlfriend in proposal with 50 packs of diapers arranged in a heart shape way. Then, Feng put the wedding ring in the diaper packet carried by a drone. His girlfriend finally said yes

The marriage proposal was inspired by the famous couple Taiwanese Alyssia Xiu and Jie Kai Chia and who announced the arrival of their next baby through social networks.

Shortly after they shared a video in which is illustrated a mom who is tired and has to manage between caring her baby and her daily work.

Looking carefully at the video, we see the diaper of brand “Libero” that is strangely the same brand of diapers that the young Chinese Feng used to make his marriage proposal.

What is even more interesting to note is the Feng’s speech during his marriage proposal: “From now on, your happiness and our children’s one will be one of my important responsibility. I will take care of the child at night to make sure that you can get enough sleep.”

Some find that the wedding proposal of Feng is too commercial and others point out the romantic side.

The two opinions are both interesting to note, but why not combine romance and marketing strategy.