Pinduoduo vs Alibaba: What is the Difference? 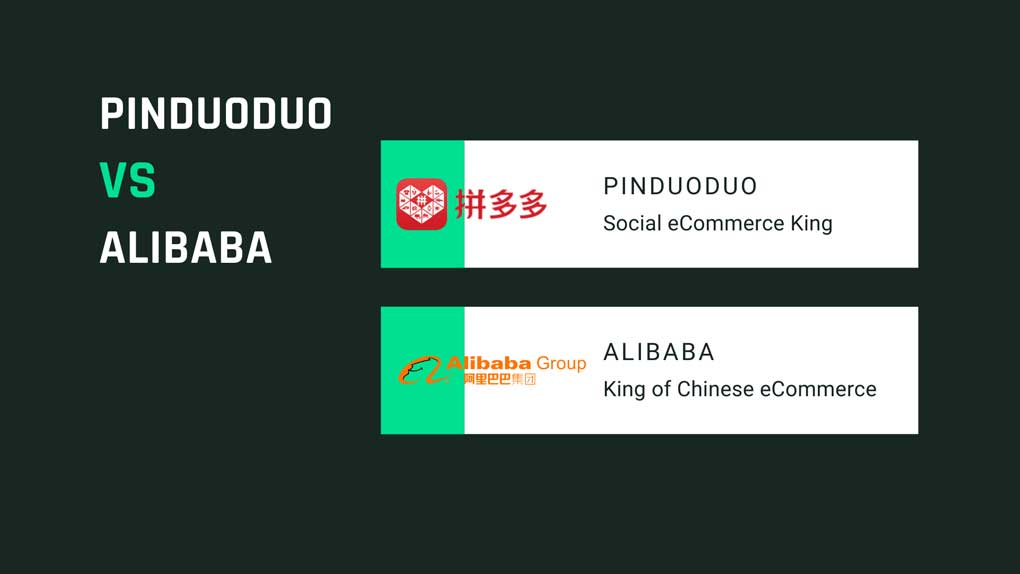 With the increase in internet penetration in China, e-commerce is growing rapidly in China. According to a World Economic Forum report issued in early 2021, more than 50% of global Internet retail sales were generated by Chinese companies. The global e-commerce market is expanding at a faster pace in China than anywhere else in the world, according to eMarketer. The US-listed company Pinduoduo (PDD) is relatively unknown outside of China. Even so, in the second-largest economy in the world, Pinduoduo is growing more rapidly and gaining more shares than its major rivals JD.com and Alibaba. Social shopping features such as sharing links to items purchased with friends and participating in group sales account for several of its success factors. In this post, we are taking a look at the Pinduoduo vs Alibaba battle and trying to understand the success of the underdog!

It’s an online marketplace that offers customers direct access to merchants. Pinduoduo was founded in 2015 and currently has over 2 million users. There is a wide range of products on the platform, such as apparel, shoes, bags, mother and children’s products, food and beverages, fresh produce, and electronic appliances.

Mobile is the main platform through which the company conducts business. There are two purchase options on this platform, including both individual and team purchases.

In an “individual purchase” option, a single person places an order or transacts with the merchant, while in a “team purchase” option several buyers come together to buy a particular item in bulk and thus benefit from lower prices. Several Chinese social networks, such as Weixin and QQ, have been integrated with Pinduoduo.

Even so, the business, which was only launched in 2015, is experiencing exceptional growth given its relative youth in the market; its biggest competitor, Alibaba, dates back to 1999. The company’s surge is driven by its group-purchase model, which gamifies the shopping experience by offering bulk discounts to all consumers who arrange a group purchase.

Alibaba, on the other hand, developed its business based on the same one-to-one sales strategy that is a hallmark of e-commerce giants like Amazon: each buyer purchases from a single seller. PDD, however, has demonstrated the power of focusing on groups of buyers as opposed to individual buyers.

How Does Pinduoduo Work?

Group buying is a large part of what makes PDD attractive. Users can choose to participate in group buying when they select an item on Pinduoduo. A lower price for the item will be achieved if more people join in.

By doing this, the item being purchased will be shared with friends and family or on social media. To complete a purchase, at least one buyer is required for each item. Those who have already committed money will be refunded if the minimum amount is not met within 24 hours. The item can be bought straight from the store but it has a higher price than purchasing it in a group.  Additionally, PDD’s app features personalized recommendations.

What Makes the Business Model of Pinduoduo so Successful

As of now, all of PDD’s revenue comes from “online marketplace services.” These services include commissions earned from selling products on the platform, as well as advertising. Alibaba and JD.com both earn the majority of their income from e-commerce, but they also have a cloud computing business. This makes PDD’s revenue stream more narrow.

The company’s revenue, however, is growing at a faster pace. PDD recorded a revenue increase of 91% in the December quarter, crossing 10.79 billion yuan ($1.55 billion). Alibaba reported an increase of 38% in earnings from last year but it came in with 161.45 billion yuan or $23.19 billion, nearly 15 times as much as PDD. The fourth quarter of 2019 brought profit for Alibaba and JD.com, and a loss for PDD.

Difference in Pricing and Product Selection

Pinduoduo cannot compete with Alibaba in terms of long-tail products and the number of brands. Nevertheless, it is important to note the fact that Pinduoduo is experiencing rapid growth at the cost of a huge deficit. During the first quarter this year, the company lost 4.1 billion yuan, compared to 7 billion last year. The total amount in Pinduoduo’s cash account and short-term investments is 42.6 billion, and its long-term and short-term debt are 7.5 billion. Those who continue to lose money seem to think that it can last only two years.

When Pinduoduo was launched, it offered more traditional products: it sourced produce from wholesalers and resold it directly to consumers online. Throughout the company’s history, however, it has pivoted into a full-scale third-party marketplace. By June 2020, it had 5.1 million buyers, 11.3% of whom came from rural areas. Currently, Amazon has around 10 million sellers worldwide, but less than 1.9 million are active (the company told Modern Retail it has a relatively small first-party operation).

Despite focusing on grocery and agriculture, the company has expanded its offerings into other sectors, including a next-day grocery delivery service, Duo Duo Grocery, which was launched in August and is now available in 25 provinces within China. The Chinese grocery market was worth $794 billion, and it is projected to expand by 8% by this year. Additionally, it has launched a payment service, called Duoduo Wallet. This puts it up against yet another arm of Alibaba’s empire.

In addition to its own platform, PDD is now becoming an entertainment hub, especially through its live stream shopping. A growing number of small farmers are streaming videos of themselves hawking their produce through the PDD platform, and this has led to some live streams bringing in $28,000 worth of product sales. Livestreaming allowed 67,000 farmers to sell 790,000 tons worth of produce last spring, according to Pinduoduo. On its platform, other video games are available, such as Duoduo Orchard, which offers prize prizes in the form of real fruit.

Pinduoduo vs Alibaba: Pros and Cons

First, Pinduoduo is focused on discounted goods, while the Alibaba e-commerce channels offer a mix of discounted and full-price items. Second, Pinduoduo is particularly popular with rural shoppers, while Alibaba has a broader appeal. Finally, Pinduoduo has been dogged by accusations of fake products, while Alibaba’s platforms have a better reputation in terms of product quality.

Alibaba and JD.com took many years to achieve the growth that Pinduoduo achieved so quickly. Nevertheless, such an extreme rate of growth has also always brought with it many problems, such as:

Pinduoduo vs Alibaba: our conclusion

There is still a lot of work to be done at Pinduoduo. Low-income consumers are familiar with counterfeit goods available online and offline in China’s discount market. Alibaba’s Taobao and Tmall combined generated more complaints than PDD, despite being smaller. The company meets with government officials a week after its July 2018 initial public offering to discuss how to resolve these complaints. In short-selling reports, short-sellers make valid claims that PDD overstates revenue and GMV to investors in the United States, and hides employee costs in an undisclosed subsidiary.

It is hard to overstate how impressive Piduoduo’s rise has been. The company is a perfect case study of how a team can quickly build and scale a transformational business. In the same way that Amazon used books as a wedge for growth, PDD used fruit to grow one of the largest e-commerce companies in five years. As opposed to Tencent creating games or Facebook selling ads, it created a vertically integrated social gaming company that has assets under its belt. Businesses in a box, a platform for managing their businesses, was developed for farmers and eventually for manufacturers. At the same time, it entertained consumers and provided them with low prices for the products they purchase every day.

Want to get started on the Chinese eCommerce Market?

Drop us a request here, we will be happy to discuss your Chinese project no matter how big your brand/company is!