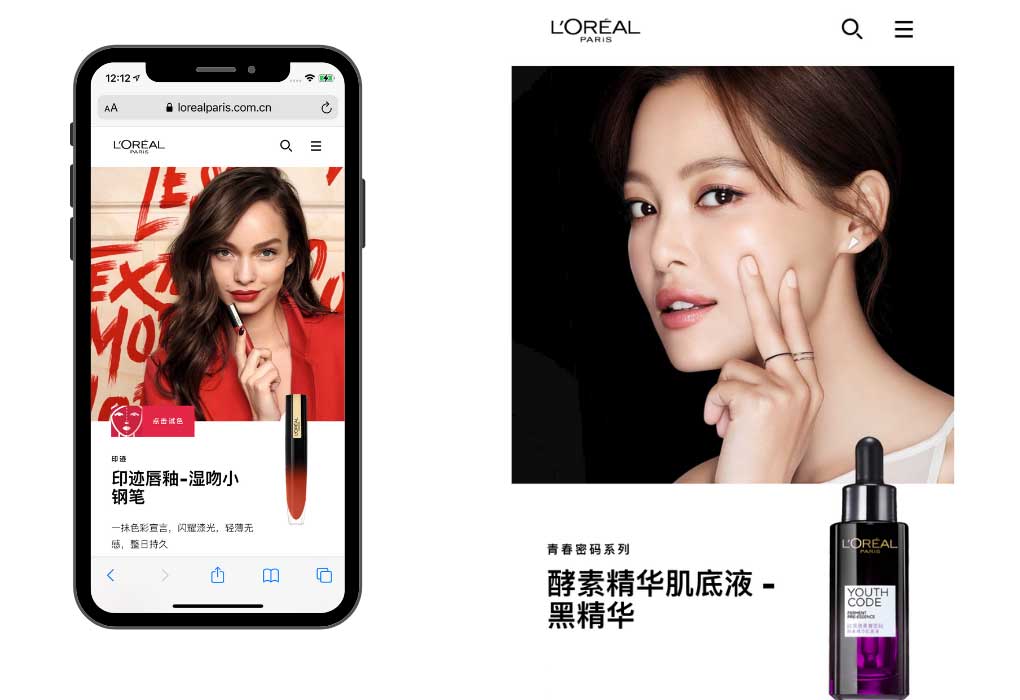 L’Oréal was created in 1909 in the personal care industry in France. The company’s operations involve the production of various cosmetics and beauty items. The firm has managed to enter the global beauty and cosmetic market. L’Oréal ranks as the largest cosmetic organization worldwide. L’Oréal has adopted internationalization as one of its business strategies in order to maximize its profits.

L’Oréal has earned its place as a leader in the country’s beauty market where it sells 25 brands, has opened one research and innovation center, a training center, two plants in Yichang and Suzhou, and 5 distribution centers. L’Oréal has introduced most of its brands in the Chinese market such as Maybelline New York and Lancôme. In order to market its products successfully in the Chinese market, L’Oréal has adopted the concept of localization in its marketing processes.

A large number of multinational cosmetics companies have entered China over the past twenty years. Some of the major players include Procter & Gamble, L’Oreal, Shiseido, Amway, and Unilever.

According to Qianzhan, foreign brands such as Procter & Gamble and L’Oréal accounted for approximately 50% of the market share in the cosmetics industry in China. Domestic firms (Chicmax, Pechoin, and JALA Group) occupied 17.97% of market share. However, it’s expected to grow because, from 2014 to 2017, the market share of Pechoin increased from 1.4% to 2.3%, and that of Chando increase from 1.3% to 1.7%.

In order to penetrate the Chinese market, L’Oréal adopted the concept of standardization, by the introduction of Yue-Sai in 1992. The product was initially owned by Yue Sai Kan and was specifically targeted towards Asian women. To meet the beauty and skincare needs amongst Asian women, L’Oréal identified Yue Sai as a potential brand that was designed for the Asian market, consequently, L’Oréal purchased Yue Sai.

The acquisition was in line with the firm’s mission, being “beauty for all”. The group later acquired another Chinese brand known as Mininurse, developing a strong market position in China through the acquisition and licensing of national brands.

After acquiring Yue Sai, L’Oréal undertook a complete product improvement and development in an effort to ensure that the product aligns with the Chinese skin consumer needs. This move led to the introduction of the Vital Essential line in 2007. The product was developed using Ganoderma mushroom extracts. In China, this mushroom is considered to have medicinal value and such a move illustrates the firm’s commitment to align its products to the Chinese culture.

L’Oréal is very much aware of the importance of market targeting, segmentation, and positioning. In the process of entering the Chinese market, L’Oréal segmented the market by age as its core demographic market variable. During its initial market entry phase, the firm adopted a concentrated market targeting strategy. A concentrated targeting strategy entails selecting a specific market segment and concentrating the marketing efforts on the identified segment.

A concentrated targeting strategy enables organizations to understand the consumers’ motives, needs, and satisfaction levels. L’Oréal targeted women as the core customers to target. China has undergone significant transformation especially in regard to personal care and beauty over the past few decades.

The younger Chinese generation is more receptive to beauty and cosmetic products as compared to the older generation as is evidenced by the increase in consumer spending. Consumption of beauty and cosmetic products has increased significantly among young male and female consumers. It is estimated that the Chinese cosmetics and beauty market is growing at a rate of 13% annually and it is estimated that the country will continue growing at a rate of 10%.

L’Oréal ensured that aspects of Chinese traditional medicine were integrated into the process of producing YueSai items. The Chinese appreciate their cultural heritage and culture being integrated into their consumption process. Some of the elements that they hold in high esteem are related to health, medicine, and food.

The amount was used in its marketing processes especially through television and print media. The advertising campaign featured Du Juan, a renowned Chinese supermodel. In a bid to attract potential customers, the firm ensured that a high level of creativity and effective design was integrated into the television commercials. During the advertising campaign, the firm adopted the tagline “I hold my future in my hand.” The other slogan adopted included “I look forward to every day with confidence.” Consequently, the firm was in a position to appeal to the Chinese women’s emotions.

In its effort to create awareness through public relations, L’Oréal contracted renowned Chinese personalities and celebrities to endorse its products. Some of the major personalities included singers, athletes, actors, and actresses. 80% of the firm’s marketing communication efforts were focused on skincare products and 20% on makeup. The firm had not adopted an effective public relations channel as it had not adopted new media platforms especially Weibo, which is a very famous social media platform commonly used in China.

The Chinese cosmetics market is changing at a quick rate and the young consumers, whose choices are drastically different from those of the previous generation, are becoming the driving force of this market. Young Chinese women wear make-up and eagerly track the latest trends. In recent years, L’Oréal China started targeting a younger audience by implementing a series of marketing campaigns directly aimed at them.

L’Oréal leverages social media, like Weibo, WeChat, to reach Chinese customers. Most of L’Oréal’s brands have their own official accounts on Weibo with a large number of followers. L’Oréal created a social media campaign with #我的选择 我值得拥有(#I deserve it) to advertise their Women’s Day promotions through Weibo. In this campaign, women fans were encouraged to share their feelings and stories by uploading images to social media platforms Weibo using hashtags #我的选择 我值得拥有. Also, many celebrities like Li Gong, Zhilei Xin (Chinese famous actresses) are joining the campaign to share their own words with Weibo users, which attracts more fans to participate and express their comments. There are around 24.8 million reads and 470 thousand discussions on Weibo #我的选择 我值得拥有 topic.

Want to launch you cosmetic brand in China?

Feel free to reach out to us to find out more about our solutions and how we can help you introduce your cosmetics brand to Chinese customers efficiently.

Did you like this Loreal China Analysis? have a look at our deep dive into L’occitane China, Lancôme, SKII, and Shiseido analysis.